~~The Summer Palace of Peter the Great in St. Petersburg, one of the first buildings to incorporate the modern-type hydrologic central heating 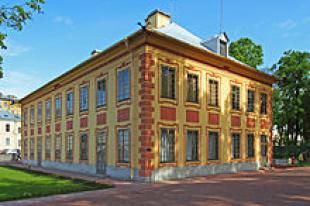 ~~Some buildings in the Roman Empire used central heating systems, conducting air heated by furnaces through empty spaces under the floors and out of pipes in the walls—a system known as a hypocaust.[1] In the early medieval Alpine upland, a simpler central heating system where heat travelled through underfloor channels from the furnace room replaced the Roman hypocaust at some places. In Reichenau Abbey a network of interconnected underfloor channels heated the 300 m² large assembly room of the monks during the winter months. The degree of efficiency of the system has been calculated at 90%.[2] In the 13th century, the Cistercian monks revived central heating in Christian Europe using river diversions combined with indoor wood-fired furnaces. The well-preserved Royal Monastery of Our Lady of the Wheel (founded 1202) on the Ebro River in the Aragon region of Spain provides an excellent example of such an application. The Roman hypocaust continued to be used on a smaller scale during late Antiquity and by the Umayyad caliphate, while later Muslim builder employed a simpler system of underfloor pipes.[3] By about 1700 Russian engineers had started designing hydrologically based systems for central heating. The Summer Palace (1710–1714) of Peter the Great in Saint Petersburg provides the best extant example. Slightly later, in 1716, came the first use of water in Sweden to distribute heat in buildings. Mårten Triewald, a Swedish engineer, used this method for a greenhouse at Newcastle upon Tyne. Jean Simon Bonnemain (1743–1830), a French mechanical engineer,[4] invented a heating regulation device for hot water networks and introduced the technique to industry in the poultry industry (chicken incubator) at le Pecq, near Paris. Angier March Perkins developed and installed some of the earliest steam-heating systems in the 1830s. The first was installed in the home of Governor of the Bank of England John Horley Palmer so that he could grow grapes in England's cold climate.[5] Franz San Galli, a Polish-born Russian businessman living in St. Petersburg, invented the radiator between 1855–1857, which was a major step in the final shaping of modern central heating.[6

Download our History of Air Conditioning for more information 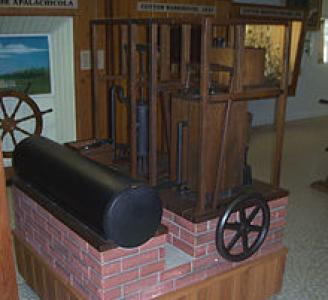 ~~Three-quarters scale model of Gorrie's ice machine. John Gorrie State Museum, Florida The 2nd-century Chinese inventor Ding Huan (fl 180) of the Han Dynasty invented a rotary fan for air conditioning, with seven wheels 3 m (9.8 ft) in diameter and manually powered.[3] In 747, Emperor Xuanzong (r. 712–762) of the Tang Dynasty (618–907) had the Cool Hall (Liang Tian) built in the imperial palace, which the Tang Yulin describes as having water-powered fan wheels for air conditioning as well as rising jet streams of water from fountains.[4] During the subsequent Song Dynasty (960–1279), written sources mentioned the air-conditioning rotary fan as even more widely used.[5]

In the 17th century, Cornelis Drebbel demonstrated "turning Summer into Winter" for James I of England by adding salt to water.[6]

In 1758, Benjamin Franklin and John Hadley, a chemistry professor at Cambridge University, conducted an experiment to explore the principle of evaporation as a means to rapidly cool an object. Franklin and Hadley confirmed that evaporation of highly volatile liquids such as alcohol and ether could be used to drive down the temperature of an object past the freezing point of water. They conducted their experiment with the bulb of a mercury thermometer as their object and with a bellows used to "quicken" the evaporation; they lowered the temperature of the thermometer bulb down to −14 °C (7 °F) while the ambient temperature was 18 °C (64 °F). Franklin noted that, soon after they passed the freezing point of water 0 °C (32 °F), a thin film of ice formed on the surface of the thermometer's bulb and that the ice mass was about a quarter-inch thick when they stopped the experiment upon reaching −14 °C (7 °F). Franklin concluded, "From this experiment one may see the possibility of freezing a man to death on a warm summer's day"...[7]

In 1820, English scientist and inventor Michael Faraday discovered that compressing and liquefying ammonia could chill air when the liquefied ammonia was allowed to evaporate. In 1842, Florida physician John Gorrie used compressor technology to create ice, which he used to cool air for his patients in his hospital in Apalachicola, Florida.[8] He hoped eventually to use his ice-making machine to regulate the temperature of buildings. He even envisioned centralized air conditioning that could cool entire cities.[9] Though his prototype leaked and performed irregularly, Gorrie was granted a patent in 1851 for his ice-making machine. His hopes for its success vanished soon afterwards when his chief financial backer died; Gorrie did not get the money he needed to develop the machine. According to his biographer, Vivian M. Sherlock, he blamed the "Ice King", Frederic Tudor, for his failure, suspecting that Tudor had launched a smear campaign against his invention. Dr. Gorrie died impoverished in 1855, and the idea of air conditioning faded away for 50 years.

Since prehistoric times, snow and ice were used for cooling. The business of harvesting ice during winter and storing for use in summer became popular towards the late 19th century.[10] This practice was replaced by mechanical ice-making machine.

James Harrison's first mechanical ice-making machine began operation in 1851 on the banks of the Barwon River at Rocky Point in Geelong (Australia). His first commercial ice-making machine followed in 1854, and his patent for an ether vapor-compression refrigeration system was granted in 1855. This novel system used a compressor to force the refrigeration gas to pass through a condenser, where it cooled down and liquefied. The liquefied gas then circulated through the refrigeration coils and vaporised again, cooling down the surrounding system. The machine employed a 5 m (16 ft.) flywheel and produced 3,000 kilograms (6,600 lb) of ice per day. Though Harrison had commercial success establishing a second ice company back in Sydney in 1860, he later entered the debate over how to compete against the American advantage of unrefrigerated beef sales to the United Kingdom. He wrote Fresh Meat frozen and packed as if for a voyage, so that the refrigerating process may be continued for any required period, and in 1873 prepared the sailing ship Norfolk for an experimental beef shipment to the United Kingdom. His choice of a cold room system instead of installing a refrigeration system upon the ship itself proved disastrous when the ice was consumed faster than expected.

~~In 1902, the first modern electrical air conditioning unit was invented by Willis Carrier in Buffalo, New York. After graduating from Cornell University, Carrier, a native of Angola, New York, found a job at the Buffalo Forge Company. While there, Carrier began experimenting with air conditioning as a way to solve an application problem for the Sackett-Wilhelms Lithographing and Publishing Company in Brooklyn, New York, and the first "air conditioner", designed and built in Buffalo by Carrier, began working on 17 July 1902. Designed to improve manufacturing process control in a printing plant, Carrier's invention controlled not only temperature but also humidity. Carrier used his knowledge of the heating of objects with steam and reversed the process. Instead of sending air through hot coils, he sent it through cold coils (ones filled with cold water). The air blowing over the cold coils cooled the air, and one could thereby control the amount of moisture the colder air could hold. In turn, the humidity in the room could be controlled. The low heat and humidity helped maintain consistent paper dimensions and ink alignment. Later, Carrier's technology was applied to increase productivity in the workplace, and The Carrier Air Conditioning Company of America was formed to meet rising demand. Over time, air conditioning came to be used to improve comfort in homes and automobiles as well. Residential sales expanded dramatically in the 1950s.

In 1906, Stuart W. Cramer of Charlotte, North Carolina was exploring ways to add moisture to the air in his textile mill. Cramer coined the term "air conditioning", using it in a patent claim he filed that year as an analogue to "water conditioning", then a well-known process for making textiles easier to process. He combined moisture with ventilation to "condition" and change the air in the factories, controlling the humidity so necessary in textile plants. Willis Carrier adopted the term and incorporated it into the name of his company. The evaporation of water in air, to provide a cooling effect, is now known as evaporative cooling. Evaporative cooling was the first real air-conditioning and shortly thereafter the first private home to have air conditioning (The Dubose House) was built in Chapel Hill, North Carolina in 1933. Realizing that air conditioning would one day be a standard feature of private homes, particularly in the South, David St. Pierre DuBose (1898-1994) designed an ingenious network of ductwork and vents, all painstakingly disguised behind intricate and attractive Georgian-style open moldings. Meadowmont is believed to be one of the first private homes in the United States equipped for central air conditioning.[11]

In 1945, Robert Sherman of Lynn, MA, invented the portable, in-window air conditioner that cooled and heated, humidified and dehumidified, and filtered the air (Patent # 2,433,960 granted January 6, 1948). It was subsequently stolen by a large manufacturer. Sherman did not have the resources to fight the big corporation in court—they promised to "break him" if he tried - and thus never received any money or recognition.

~~The basic concept behind air conditioning is said to have been applied in ancient Egypt, where reeds were hung in windows and were moistened with trickling water. The evaporation of water cooled the air blowing through the window, though this process also made the air more humid (also beneficial in a dry desert climate). In Ancient Rome, water from aqueducts was circulated through the walls of certain houses to cool them. Other techniques in medieval Persia involved the use of cisterns and wind towers to cool buildings during the hot season. Modern air conditioning emerged from advances in chemistry during the 19th century, and the first large-scale electrical air conditioning was invented and used in 1902 by Willis Haviland Carrier. The introduction of residential air conditioning in the 1920s helped enable the great migration to the Sun Belt in the US. 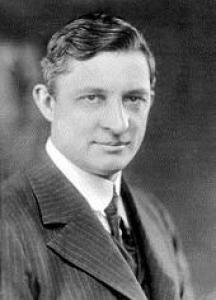